Berry is a 14-year-old Amazon frog who performs as an acrobat in a traveling caravan. She meets up with Frogger while looking for her younger sister, Blue. Not only is Berry agile, she also has the ability to stick onto walls with her hands and feet.

Berry and Blue are members of a traveling caravan that settled in a forest area near the Hooiedoo Jungle. While Berry was picking up lunch, her fellow associates fell victim to the mind-control helmets that Dr. Wani's organization had manufactured. She and her sister went looking for them when she bumped into Frogger and Lumpy during their own travels, unintentionally startling them. She explained the situation to them, influencing Frogger to investigate further. Before he took off, Berry provided him with passes to her caravan in case he wanted to stop by later.

Depending on which route Frogger took at a crossroad in Firefly Swamp, Berry would later be informed by the Hooiedoo Chief (presumably Chief Bonzo) that Frogger was traveling to the helmet factory. She eventually caught up with him after he made a vain attempt to reach a ledge that contained the entrance to the Crocodite Mine. Berry volunteered to sneak into the mine and shut it down due to her ability to climb up the wall, leaving Frogger is left with the freedom to locate Dr. Wani's fortress. Berry made her way to a chamber that housed a machine that would cause the entire mine to cave in. She took a look and commented that it didn't seem bad, but she jinxed herself when one of Dr. Wani's boon companions charged into the room to hinder her efforts to do so. Nonetheless, she managed to avoid him and successfully got the device to work. Although Berry is not seen again for the rest of the game, Dr. Finnius, the narrator of the story, mentioned that she was facing terrible peril in the mine. It is safe to assume, however, that the tree frog made it out in one piece.

Traveling down a secondary path either at the farm or at the beach will trigger a side-story where Berry frantically comes to Frogger and Lumpy for help rescuing Blue from a creature that allegedly abducted her. The latter volunteered to look for her in the direction Berry pointed while she and Frogger stayed behind on the path. Lumpy was able to return Blue to her older sister where she innocently explained that the "nice monster" needed a playmate because he was lonesome. Berry was reassured that she was unharmed before politely lecturing her not to wander off from her again. She then goes on to introduce herself and explain her situation as she did if Frogger chose to take the default route. The only other difference was that Berry stayed behind to look after Lumpy, still nauseous from consuming the berries that gave him the ability to inflate into a ball.

Berry assisted Lily with delivering Frogger's invitation to his birthday party by accompanying her while the latter taped it to his front door. The girls snickered and left the scene briefly before Dr. Wani and his parrot showed up to maliciously revise Frogger's route to the location.

As of Version 1.0.1, she, along with Dr. Finnius, are added as playable characters.

Berry is quite sociable and resourceful. As a member of a traveling caravan, she has likely met many kind and sometimes dubious faces during the journeys she's been on. She is not as naïve as her younger sister due to these experiences, but she is quick to approach strangers when in trouble as shown in a side story in Helmet Chaos when she encountered Frogger and Lumpy requesting their assistance despite having just met them seconds ago. This may be because she was so terrified that Blue may have been hurt that her options were far too narrow. As she and Frogger got better acquainted later on, she became concerned about his progress so she consulted the Hooiedoo Chief (possibly Chief Bonzo) for his whereabouts.

Berry's brave side surfaced during her tenure as a playable character when she volunteered to sneak into the Crocodite Mine in Frogger's place. She (and Frogger) had prior knowledge about the mine's purposes thanks to breaking the fourth wall, which lead them to conclude that shutting down the mine would strip Dr. Wani of the helmets' source of power.

True to her status as a tree frog, Berry is capable of climbing walls by sticking to them. As she mentioned to Frogger in Helmet Chaos, it runs in her family. As a playable character, this ability is restricted to blue tiles.

Contrary to Helmet Chaos where she can't swim during gameplay, Berry has gained the ability to do so in Decades. It is likely that she has practiced in between the events of both games. 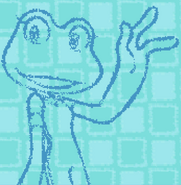 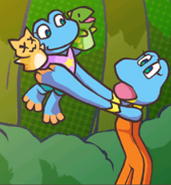