For other uses, see Frogger (disambiguation).

Single player
Frogger (フロッガー, Furoggā?) is a 1981 arcade game developed and published by Konami. In North America, it was published jointly by Sega and Gremlin Industries. The object of the game is to direct frogs to their homes one by one by crossing a busy road and navigating a river full of hazards.

Frogger was positively received and followed by several clones and sequels, and was ported on various supports. By 2005, Frogger in its various home video game incarnations had sold 20 million copies worldwide, including 5 million in the United States. The game found its way into popular culture, including television and music.

The gameplay of Frogger revolves around guiding a frog to one of the five (or seven) empty ponds at the top of the screen. There are no action buttons, as the player only moves the frog in the four cardinal directions. In order to reach the ponds, the player must guide the frog first through a street full of traffic, then through a river with moving logs and lillypads. Once you reach a pond, another frog will appear at the bottom of the screen, which the player must take to one of the empty ponds again. Once all ponds are filled the game loops at a higher difficulty. 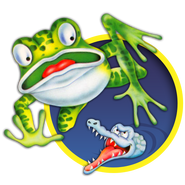 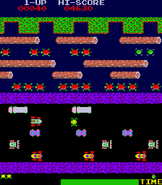