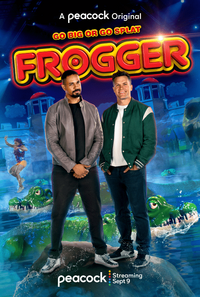 The classic arcade game Frogger has been reimagined as a real-life obstacle course in a new game show on Peacock, NBC Universal’s streaming service. The Peacock Original first began streaming on Sept. 9 with new episodes every Thursday.

The game show will allow players to try and complete a supersized Frogger course for the chance to win $100,000. Hosted by Kyle Brandt and Damon Wayans Jr., the show is meant to resemble the 1981 classic game where players have to direct a frog home through roads and rivers, avoiding dangerous obstacles. Instead of directing the frog, however, these players have become the frog themselves. Yes, it’s just like that episode of Seinfeld. The cars and predators found in the original game will be featured in the show, this time as large foam obstacles for contestants to tackle over a giant pool of water. NBCUniversal's Frogger looks as if it will be similar to other obstacle course shows such as Wipeout or American Ninja Warrior, and these shows continue to be a popular genre within competition shows.