Lily, also known as Lillie Frog, is a recurring character in the Frogger series. She is Frogger's girlfriend.

"Lillie Frog is Frogger's new girlfriend, and sister to all those lost babies! Every bit the equal of Frogger, she's learnt all of his amazing skills. Lillie Frog is smart, inquisitive and bubbly, but always alert to the sneaky Swampy and the plight of the babies!"

Frogger's Girlfriend. A charming and pleasant girl who, more than anything in the world, enjoys watching the fireflies dance above the swamp.

Lily is a cordial frog that gets along famously with her friends, especially Frogger and Lumpy. In The Rescue, Frogger describes her as his, "sweet, kind, and pretty girlfriend", indicating that Lily is notable for her polite nature. She can also be curious at times. 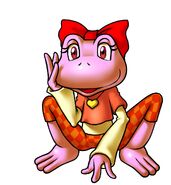 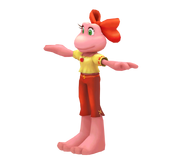